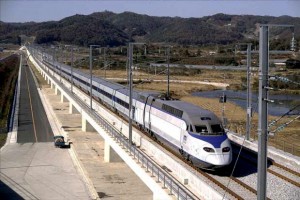 foreseeable economic and environmental impacts of high speed rail for our region and state.
From 1993 to 2014, Mr. Diridon was executive director of the Mineta Transportation Institute (MTI), a transportation policy research center created in 1991 by Congress. He is known as the father of modern transit service in Silicon Valley and has chaired more than 100 international, national, state, and local programs, most related to transit and the environment. He frequently provides legislative testimony on sustainability.

And a new lunch menu to choose from!

Want to attend this presentation, but not yet a MCBC Member?  You can join today by completing and submitting this APPLICATION

Rod Diridon, Sr.
Emeritus Executive Director
Mineta Transportation Institute
From 1993 to 2014, Rod Diridon, Sr., was executive director of the Mineta Transportation Institute (MTI), a transportation policy research center created in 1991 by Congress. He is known as the father of modern transit service in Silicon Valley and has chaired more than 100 international, national, state, and local programs, most related to transit and the environment. He frequently provides legislative testimony on sustainability.
Mr. Diridon was appointed in 2001 and 2005 by Governors Davis and Schwarzenegger, respectively, to the California High Speed Rail Authority Board of which he is chair emeritus. He helped found and is chair emeritus of the American Public Transportation Association’s (APTA) High Speed Intercity Rail Committee and National High Speed Rail Corridors´ Coalition. He served as president of the national Council of University Transportation Centers (CUTC), and is the elected chair of the US High Speed Rail Association’s (US HSRA) Board.
In 1992, he served as the chair of APTA in Washington DC and for six years as North American vice chair of the International Transit Association (UITP) in Brussels. In 1976, he chaired the state’s first successful local half-cent sales tax for transit and subsequently chaired a state-wide and four successful regional transportation financing and bond elections.
In 1996 he founded and chaired the Transportation Research Board´s study panel, “Combating Global Warming through Sustainable Transportation Policy.” He advised the Federal Transit Administration and in 1995 chaired the National Research Council´s Transportation Research Board´s Transit Oversight and Project Selection Committee. He provided keynotes, especially for high speed rail and sustainability, in more than 50 US cities and for a dozen international conferences, and he has published numerous related articles. He has driven electric cars since 1996 and his home’s photovoltaic array is a net contributor to the grid. Since 1995 he’s chaired the region’s League of Conservation Voters Board and is a Life Member of the Sierra Club. He received lifetime achievement awards from APTA, CUTC, National Association of Counties, San Jose State’s College of Business, US HS Ground Transport Association, US HSRA, and others.
His political career began in 1971 as the youngest person ever elected to the Saratoga City Council. He retired in 1995 because of term limits after completing six terms as chair of both the Santa Clara County Board of Supervisors and the Transit Board. He was the only person to chair the San Francisco Bay Area´s (119 cities, 27 transit agencies, and 9 counties) three regional governments: the Metropolitan Transportation Commission, the Air Quality Management District, and the Association of Bay Area Governments. He chaired nine successful rail system development project boards. In 1995 the region’s main train station was renamed the “San Jose Diridon Station” upon his retirement from elected office.

After receiving a BS in accounting and MSBA in statistics in 1963 from San Jose State University, he served two combat tours as a naval officer in Vietnam. In 1968 he founded the Decision Research Institute which was sold in 1977 after his election. Mr. Diridon has two successful children, Rod Jr. and Mary Margaret, and four grandchildren. He is married to Dr. Gloria Duffy, former US Deputy Assistant Secretary of Defense and now president and CEO of the Commonwealth Club of California. In July of 2014 he shifted to emeritus status at MTI.